Training refugees is an opportunity for everyone – the refugees can learn a trade and find a new home, while companies acquire new talent and increase their diversity. In this article, staff from Afghanistan, Syria and Eritrea, and their colleagues and supervisors from the Friedhelm Loh Group, talk about how we can do this together and what makes it worthwhile. It gives us faith in the future – even if there are obstacles in our way.

Refugees were under 18 years of age

Hundreds of thousands of people are currently trying to flee Afghanistan.

More than 82 million people worldwide have been displaced by war, terror or famine in their homelands. They long to find a safe, better life far away from their old homes. The road they travel leads to an uncertain future, and there are many obstacles in their way. Immigrants face a mountain of tasks when they try to set themselves up in a new homeland. They have to get used to a new culture, a new language and a new job. This takes a lot of courage. In fact, successful integration takes courage on both sides – including the people in the host communities.

RESPONSIBILITY TOWARDS OUR LOCAL COMMUNITY

The companies of the Friedhelm Loh Group are proof that this courage is rewarded. While many other employers are put off hiring refugees due to their uncertain residency prospects, these companies are offering a secure future to refugees who are unable to return to their homelands due to the unstable situation there. The refugees receive training and are integrated into working life. Owner and CEO Prof. Friedhelm Loh explains: “As the region’s biggest employer, we have a responsibility to our local area, and there are many people here looking for a new, peaceful homeland.”

immigrants are needed every year to fill the gaps in the German job market created by demographic change, according to the Federal Employment Agency.

This is why the Friedhelm Loh Group, together with the Rittal Foundation, the district of Lahn-Dill, and the Lahn-Dill Chamber of Commerce, launched the “Qualifications for refugees” project in 2015. Its success has been remarkable. The Syrian, Eritrean and Afghani refugees involved are now fully integrated into working life. “As a global company, we benefit from the special talents and experiences of the refugees, which we are in need of due to the current shortage of skilled workers,” says Prof. Loh. It is an example for other companies, too. The fact is, Germany is running out of workers. According to the Federal Employment Agency, some 400,000 immigrants are needed every year to fill the gaps created by demographic change.

million refugees with various residence statuses were living in Germany in 2020.

Source: German Federal Ministry of the Interior, Building and Community

AN OPPORTUNITY IN A FOREIGN COUNTRY

It took courage for Khaibar F. and Mohibullah M.* to leave Afghanistan years ago. War forced them out. They saw no future for themselves in their country, which had been destroyed and was still threatened by terrorism. “As a child, I wanted to become an engineer, but I simply didn’t stand a chance,” says Khaibar. After an adventurous escape via Russia, he ended up in Germany in 2013 – without knowing anyone, or the language, or anything about the country. Did he stand a chance at all in this new country?

Yes, he did – he found his chance in the “Qualifications for refugees” pilot project. Khaibar was selected for the project. Two years later, Khaibar and his Rittal colleague Eyobel G. from Eritrea were among the first refugees in the Lahn-Dill district to take the Chamber of Commerce exams – with success. In the meantime, Khaibar and Eyobel have become experienced machine and system operators. Not only that, they still work for Rittal, in its Ewersbach plant.

“I just really like the company – my colleagues are friendly, and my supervisors support me whenever I want to add to my qualifications,” says Khaibar. However, there is something else just as important. “Khaibar is always extremely committed. It’s infectious for the whole team,” says his Team Leader Lothar-Michael Wege. At work, everything is great. At home, the Afghani has also settled in well in Germany. He married in 2019, and now has a child and a flat of his own. In addition, he plays football in his spare time for SSV Guntersdorf in the district league. The fact is, Khaibar has integrated into German life. This is also partly down to his colleagues, who respect and accept him. After all, good interpersonal relationships are what integration is all about.

Eyobel G. from Eritrea has had a similar experience to Khaibar: “I really like it at Rittal. The people here have given me the chance to learn a trade. I wouldn’t want to be anywhere else,” says the 32-year-old, and goes on to say how hard he found it to learn German. He now copes well with the language. This is at least partly down to the way he communicates with people. He interacts with lots of Germans in the community he now calls home – at the football, at parties, or in the church where this devout Christian plays an active role.

The greatest compliment comes from his Team Leader, Adam Kowalski: “Eyobel is always beaming when he comes to work. The whole team loves his relaxed manner, his quiet assurance and his joy. We wouldn’t be without him.” What’s more, Kowalski adds, Eyobel is willing to take on any task, including working a shift on a Saturday afternoon. Eyobel received his permanent residence permit for Germany in the spring.

LIVING IN FREEDOM AND PEACE

Yousef and Hussein A. also have permanent residence permits. The brothers from Syria are even hoping to apply for naturalisation in the coming year. Their reason is simple: “In Germany, we can live and work in freedom and peace,” says Hussein, the older of the two. It’s no wonder he chooses to put it like that. The brothers are originally from Aleppo in the north of Syria – a town that has been fought over like no other in the civil war. They joined the Rittal refugee project four years ago, and now they have permanent employment contracts to work as trained machine and system operators in the Rittershausen plant.

KEEN TO LEARN AND INDEPENDENT

Yousef, the younger brother, is already thinking further in the future. “I would like to go to technical college and continue training in the fields of pneumatics and hydraulics.” Team Leader Viktor Ritter is well aware of Yousef’s self-confidence. “They put everything into their work. Hussein is very keen to learn, and taught himself how to weld.” Ritter also supports the two men away from work, too – helping them move house and offering advice on everyday living in Germany, for example when it came to buying a car. The brothers now always come to work by car, with Yousef turning the radio up loud and singing along. “I love German pop songs the most,” he says. His Team Leader laughs on hearing this, and simply says, “I’m glad to have them both on my team.”

“The two brothers put everything into their work. I’m glad to have them on my team.”

This feeling is familiar at LKH Kunststoffwerk in Heiligenroth, too. That is where Mohibullah M. from Afghanistan works. He was 23 years old when he arrived in the Rhine-Lahn district in 2015 without knowing a word of German. “Returning to Afghanistan was out of the question for me, so I began fighting for my future in Germany,” he says. He rose to the challenge and started working at LKH as a casual worker through a temping agency. Before that, he had spent a whole year working night shift so he could attend German classes during the day – which he paid for himself.

“Mohibullah’s thirst for knowledge, independence and sense of responsibility earned him his permanent contract.”

Mohibullah's dedication paid off. At the start of 2019, LKH took on the machine operator as an in-house member of staff. Six months later, he had worked his way up to multiple machine operator, and ultimately secured a permanent employment contract at the beginning of 2021. “He earned this through his thirst for knowledge, independence and sense of responsibility,” says Emre Varol, Team Leader in injection moulding production. For LKH Managing Director Volker Hindermann, it is also a logical decision, because “in Mohibullah M., we are gaining a reliable, responsible, high-performing member of staff.”

However, this decision was not a matter of course. It took a certain amount of courage on the part of the employer. In spring 2016, Mohibullah applied for asylum. One year later, he was notified of the decision. Due to his country of origin, he was initially granted only a “temporary suspension of deportation” – and that is still his situation. In Germany, this status usually forbids the holder from working. Only under certain conditions does the person in question obtain a work permit. Mohibullah turned to the Diakonie Rhein-Lahn (a Christian charity), where he met Zarmina Ahmadi, an immigration counsellor. “Many refugees don’t pursue the chance to get work because they don’t think anything will come of it,” she says, going on to praise LKH Kunststoffwerk for the example it sets: “Despite his precarious residency status, the company placed a great deal of trust in Mohibullah. That is by no means standard practice.”

“TEMPORARY SUSPENSION” – THEN WHAT?

The trouble is, German asylum laws and strict authorities remain a major hurdle. For example, Khaibar F. and Mohibullah M. from Afghanistan still only have a “temporary suspension of deportation” from Germany. Mohibullah's leave to remain has now been extended, but Khaibar was facing deportation – despite being a refugee who has been living in Germany for eight years, speaks fluent German, has a secure job and is fully integrated into society. Head of Training Matthias Hecker did everything he could to prevent the deportation.

With the support of Prof. Friedhelm Loh, he arranged for a letter to be sent to the relevant immigration authority highlighting the consequences for the employee and the company. It was a courageous step. The radical Islamists of the Taliban are now back in power in Afghanistan. The German Federal Ministry of the Interior, Building and Community has ordered a moratorium on deportations to Afghanistan, which gives Khaibar new hope for a future in a peaceful land. 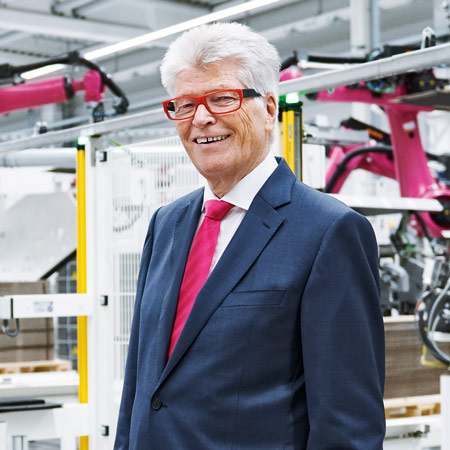 “The chance to work and build a new livelihood is essential for a meaningful life. That is why we support and encourage people who are searching for a new, peaceful home.”

*The full names are known to the editors.

back Portraits: More about our refugee colleagues
back