The steel sector is going smart

Stahlo Stahlservice. Oliver Sonst, Managing Director of one of the biggest and most advanced steel service centres in Europe knows about working toward the future. The manager personifies the company’s realignment and spoke to be top about cutting-edge technology, proximity to customers and his vision for the future.

Oliver Sonst stands on a steel platform overlooking the 22,000 square-metre workshop. From his vantage point, the CEO of Stahlo International has an ideal overview and points to the huge high-tech contour press line with pride. Behind it, an automatic crane is stacking steel coils weighing several metric tons. Kitted out with cameras and sensors, the crane positions the coils to ensure they can subsequently be processed into steel strapping or contoured cut-offs in the correct sequence. A fully qualified mechanical engineer, Sonst was appointed to oversee operations at the three steel service centres in Gera, Dillenburg and Nordhausen in October 2019. He heads off down to the shopfloor in Stahlo Gera. The plant, in the German state of Thuringia, specialises in contoured blanks and slitted coil made from high-strength and ultra-high-strength steels for the automobile industry. Each year, 400,000 metric tons of steel can be processed here.

This is the ideal environment for Sonst: “When I finished my studies, I set out to work in the automobile industry,” explains the manager. One important milestone in his career was when he worked at WKW-Erbslöh Automotive and took charge of the family-run company’s project business with BMW. “I was at the innovation centre in Munich every week. We worked really closely with the BMW engineers from the initial design ideas, test setups and prototype vehicles right through to series production.” His eyes light up as he talks about the high level of the automotive projects. Taking on the top job at Stahlo seemed a natural step for him. Sonst had got to know tier 1 business at two other family-run companies, working for eight years at each. “Stahlo has enormous potential,” says the market-focused strategist, who now holds the company’s fate in his hands – once again, as part of an owner-operated corporate group.

As he makes his way through the plant, he heads towards the contour press line. “The line here is pretty much as advanced as they come,” he declares, explaining the high level of automation throughout the entire plant. According to Sonst, a visiting delegation from Tesla were particularly impressed by the blank cutting line. He stops briefly between pallets of freshly cut blanks, examining their paperwork: “For example, these are side parts for a VW.” Two workers call to him from in front of the Schuler line: “You understand these things,” remarks the older of the two. “I need to show you something,” says the other. The men huddle around an operator terminal. Following a brief discussion, the three come to an agreement. Before taking up his studies, Sonst had trained as an industrial mechanic, so he knows the practical side of things well, which helps him relate to his workforce. “They are extremely well motivated here,” remarks Sonst. Being able to work with the very latest technology is a real source of encouragement for the 80 skilled workers. A total of 45 million euros has been invested in expanding capacities at the plant.

Sonst really values the diligence shown by every staff member. “We can’t allow a single bad part to reach our customers,” he says, emphasising the words “a single” with his hands. If anything does go wrong, the cause of the error is tracked down in a systematic analysis and the findings are then transferred to everything else. “This ensures similar errors aren’t repeated in the future,” points out Sonst. He strides on, passing coils of steel as tall as a person on either side. He gestures with outstretched arm from one end of the workshop to the other: “The material flow is perfectly organised throughout. We can manufacture on a lean basis with zero errors.” Starting from automated goods receipt and storage at the head of the workshop, materials flow through the centre, with the slitted coils manufactured on the right and sheet metal on the left. At the end, everything comes back together. The orders are put together and loaded. When working to full capacity, some 60 to 80 lorries could be dispatched daily. Sonst wants to get to that level within the next two years. “If you were to draw a circle with a radius of 500 kilometres around the plant, you’d find we’re ideally situated for automotive companies in Munich, Leipzig, Zwickau, Brandenburg and Wolfsburg,” he explains. 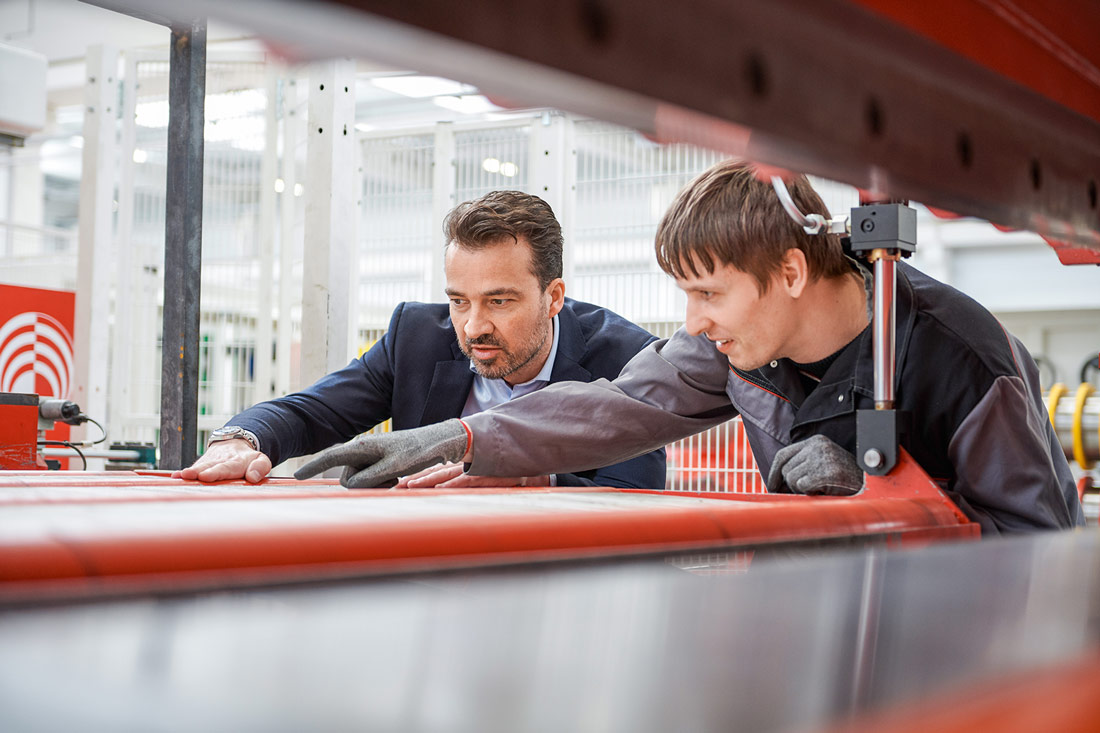 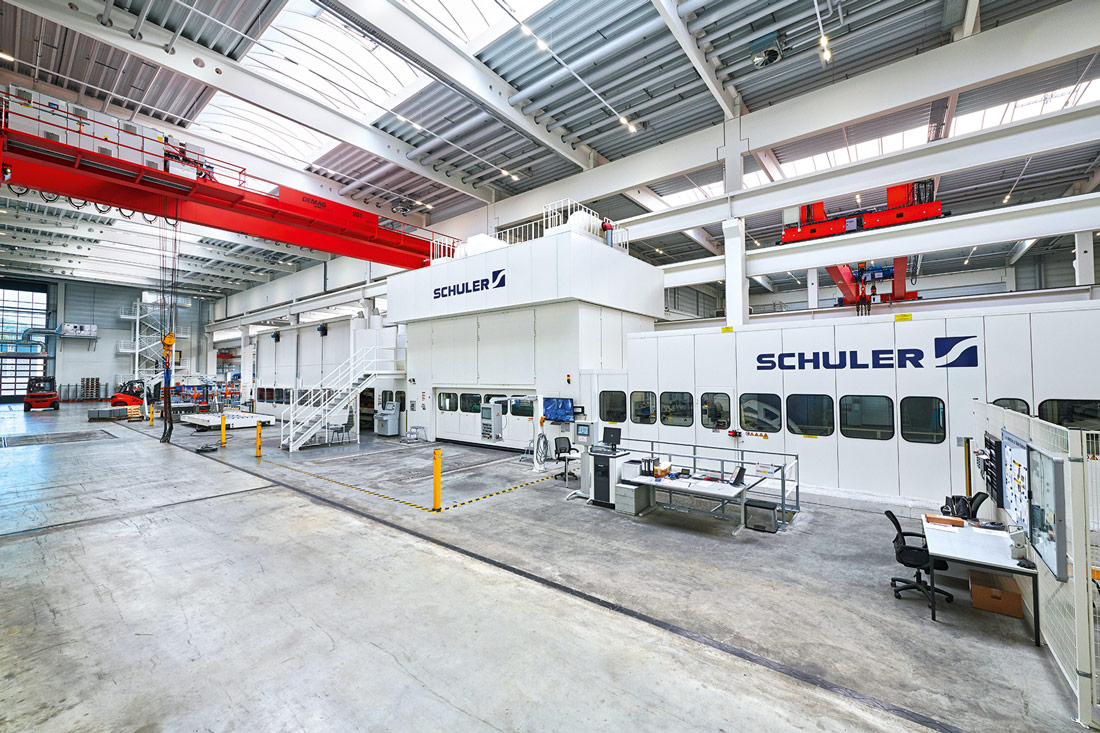 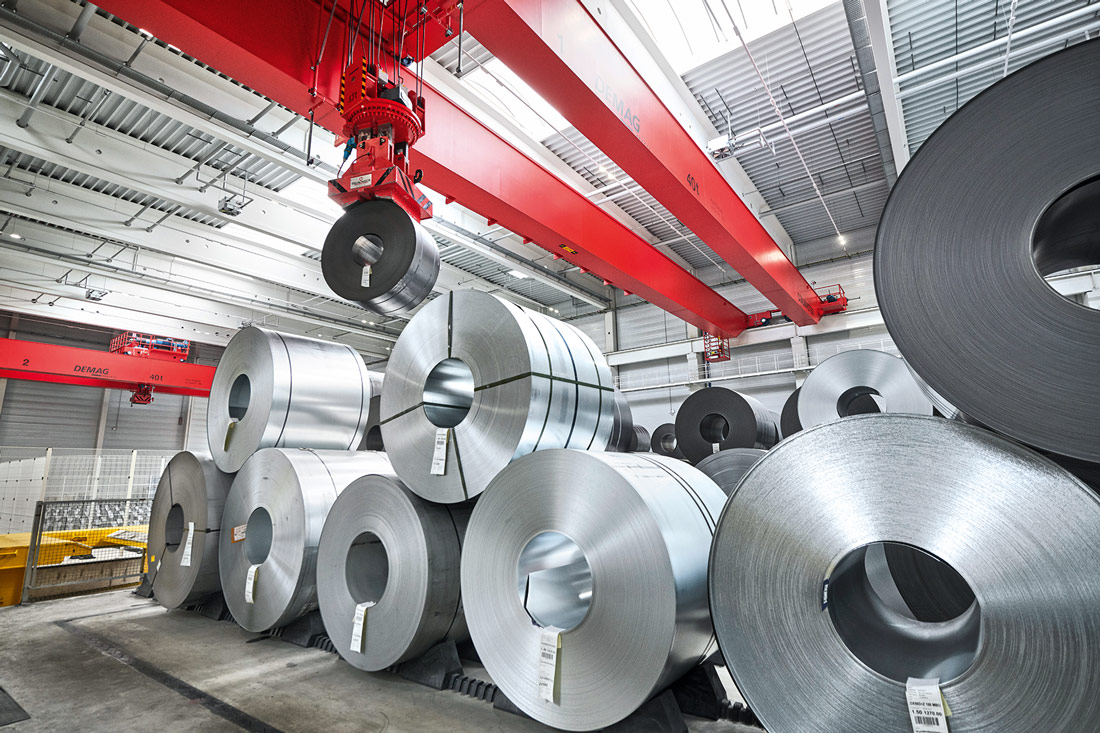 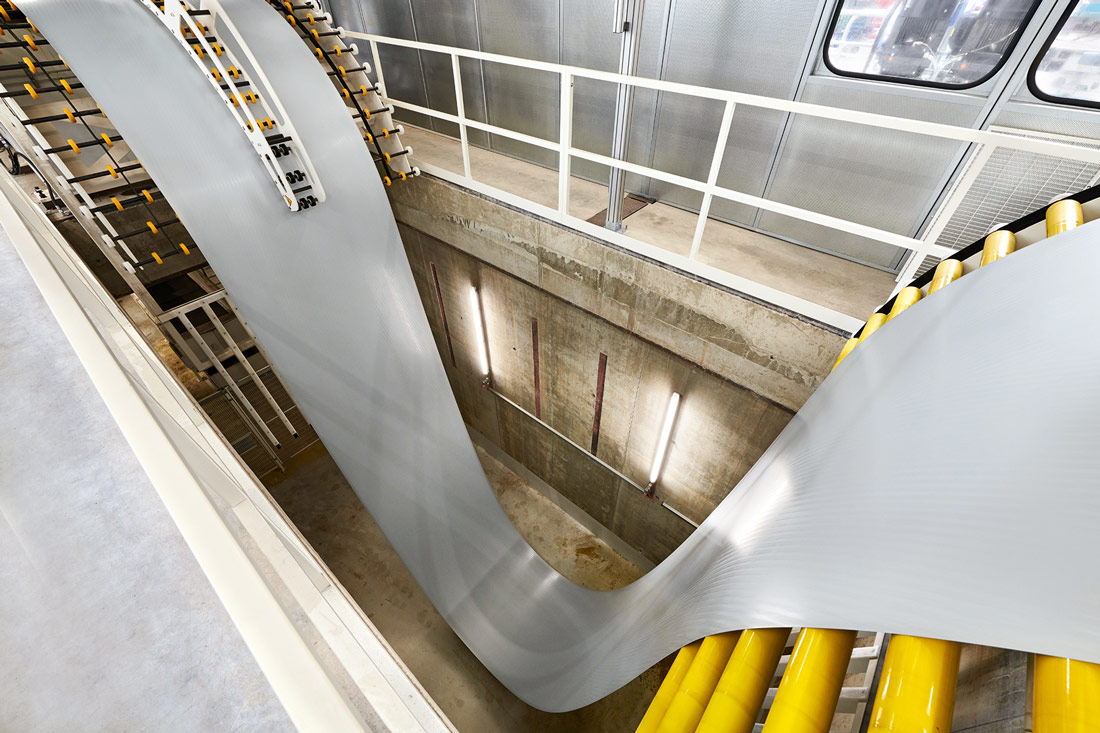 On the way back to the admin offices, Sonst stops in front of a machine spindle. It is lying on the floor and had caused a fault on one of the strip cutting machines. He and a member of staff have a look at the machine, which is all it takes for Sonst to spot the problem. On the way back to the office, the Plant Director comes over: “It’s shift change downstairs and a fault needs to be fixed on the splitting line.” The Plant Director knows that the machine needs to be started up as soon as possible if the order is to be delivered on time. “I’ll take care of it,” replies Sonst and he heads down the staircase. “Besides product quality, our customers value punctuality, dependability and transparency most of all,” emphasizes the manager.

Back in his office, he explains how he is going to meet his customers’ needs even better in the future by taking a piece of paper and sketching out what Stahlo’s operations could look like in three to four years. “Real-time data processing offers huge potential,” he says. His sketch shows a steel plant, lorries, goods trains, the customer and Stahlo itself. Big data, he explains, will help the company use volumes, qualities and pre-existing orders to calculate a time and price-optimised offer for every enquiry.

“If we know from the earliest possible stage how much material in which quality we have in which plant, on a lorry or already with us, then we can achieve the best possible combination of the desired material for the customer. Alternatively, we can also offer the customer an immediate delivery option from existing stocks. Rapid availability is the all-important criterion for our customers,” points out Sonst. The Managing Director is already in touch with software specialists who will help him turn his plans into a reality. “Now is the time for the classic steel business to go digital,” says Sonst as he looks out calmly over his production operations.