The pacemaker for tunnel operations

VX25. As they drive through the Gotthard Road Tunnel on their way to Italy, holidaymakers seldom think about the structure’s technology. One part of that technology is the enclosures. The Gotthard Road Tunnel is one of a long list of exciting projects that have already used the new VX25 enclosure system from Rittal. The quick and easy assembly of the VX25 meant Swiss company MB Systembau AG was able to set up and seamlessly replace outdated enclosures in next to no time – even while the tunnel was in use.

It is shortly before midnight and there’s little traffic on the A2 as the mint-green lorry operated by logistic service provider Gisler Transport AG enters the tunnel. A small army of orange-coloured construction site vehicles makes sure the heavyweight can travel unhindered. After just over eight kilometres, the procession comes to a halt. The lorry reverses and parks in the entrance to the Guspisbach ventilation centre. As the drivers start to unload the first Euro pallet with carefully packaged and consecutively numbered VX25 enclosures, traffic in the tunnel is already flowing again. For the employees of MB Systembau and its consortium partner InfraTech, it’s time to get down to their open-heart surgery.

Under normal circumstances, approximately 6.5 million vehicles will drive through the Gotthard Road Tunnel each year, one million of them lorries. Since opening in 1980 (2.8 million vehicles), traffic levels have therefore almost tripled.

Inaugurated in 1980, the world’s fourth-longest road tunnel is due to celebrate its 40th anniversary in 2020. Around 6.5 million vehicles cruise along the almost 17-kilometre (11 miles) route each year. “While traffic technology and tunnel radio systems in the Gotthard Tunnel have been regularly updated, the power supply system is still original. Given its age and for safety reasons, it needs to be replaced,” says Roland Suter, Project Manager and co-owner of MB Systembau. This Swiss manufacturer of bespoke panels and switchgear planned and implemented the modernisation of the Gotthard Road Tunnel’s power supply. One particular request made by the site operator was that the work be carried out without closing the tunnel, i.e. during live operation. MB Systembau was tasked with replacing the technology in the Göschenen and Airolo depots and in the Gotthard Road Tunnel’s 15 technical control centres. Five of those are located in the tunnel itself, two in the opening tunnel and entrances, and four on the Gotthard Pass, which can be accessed only in part – if at all – during winter.

“Before ordering any cable kits or tightening any screws, we sat down and planned out the replacement of the obsolete technology,” says Suter. Using the specification sheet, the engineers identified the anomalies that would occur during the replacement process and noted down potential risks. “Following on from this, we mapped out the individual work steps that would need to be carried out in the respective centres to ensure we could switch between the normal and back-up power supply,” Suter adds. Once the plan had been approved, the first material orders were placed and production began. It was the first time MB Systembau had worked with the new VX25 large enclosure system from Rittal. While this was going on, InfraTech saw to the initial installation work and stopgap measures. 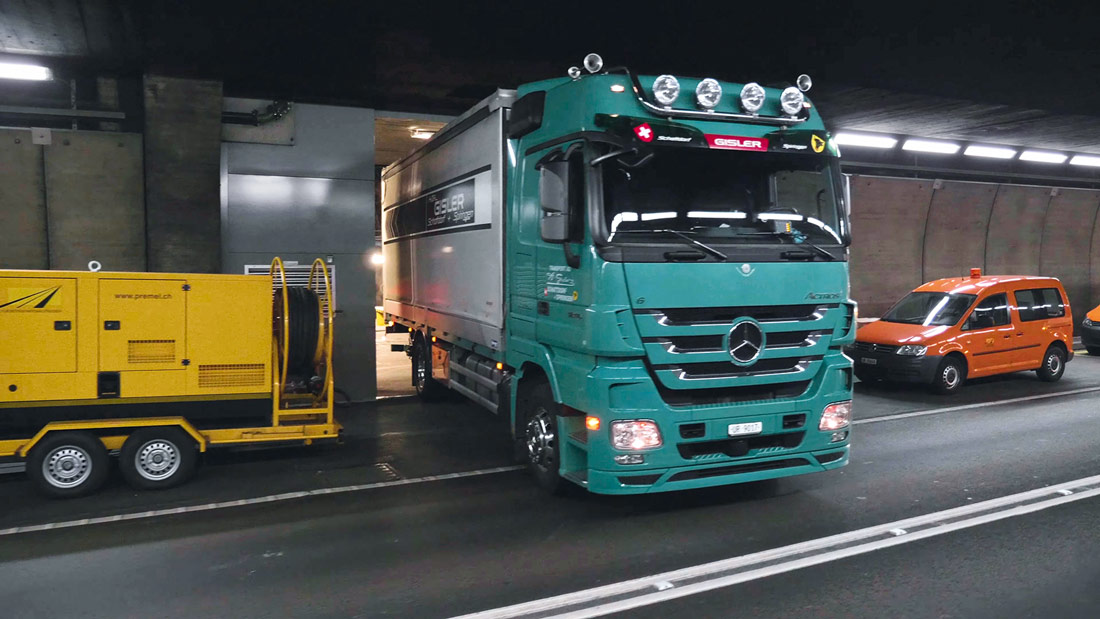 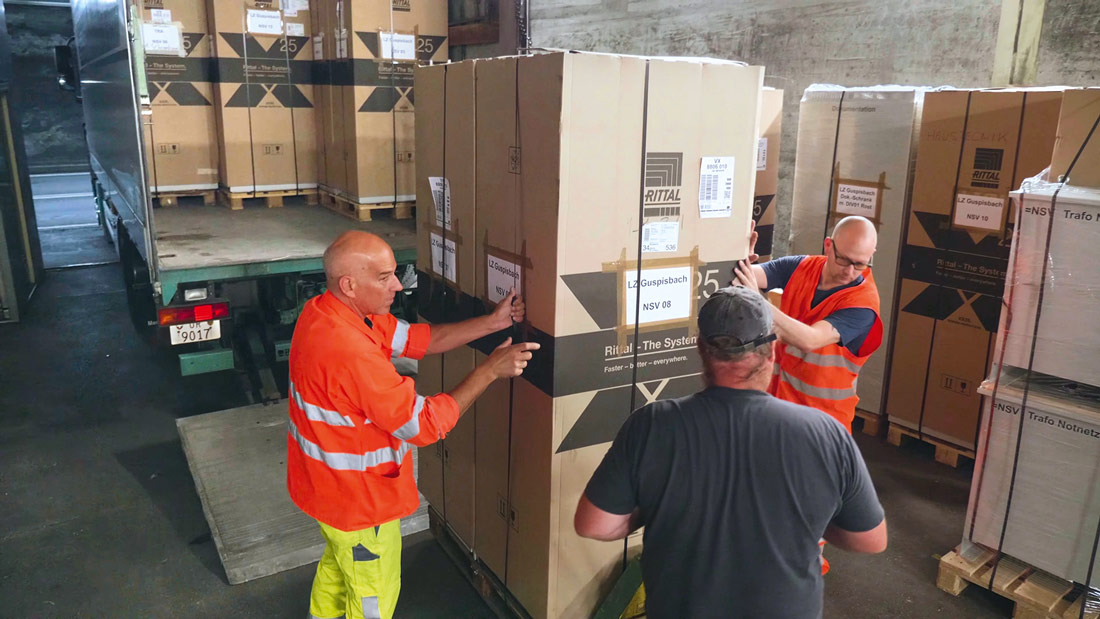 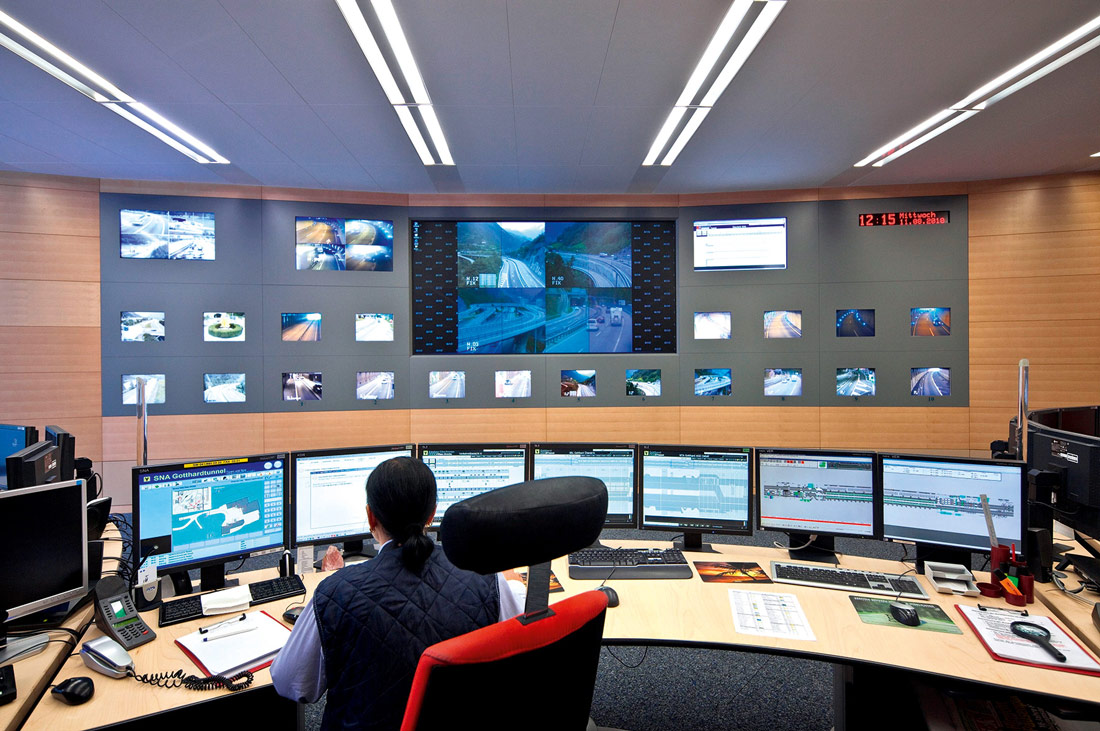 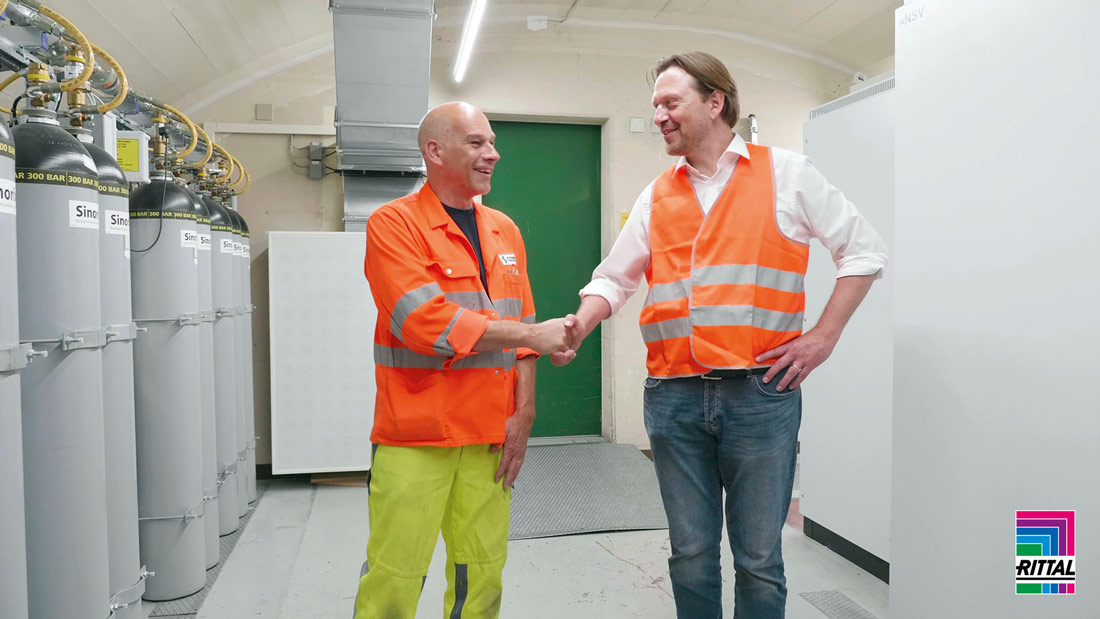 MOVING INTO THE TUNNEL

Over the course of the project, MB Systembau installed 248 enclosures measuring an overall length of 200 metres and InfraTech laid well over 100 kilometres (63 miles) of cable. To make sure the enclosures could be seamlessly replaced “just-in-time”, the technicians set them up and wired them at their own factory. “During a factory evaluation, we checked the wiring and tested the communication connections,” says Suter. Every possible operational and fault signal that could reach the command centre was scrutinized. Once the test system had been approved, the green light was then given to move the enclosures into the tunnel one centre at a time. “The old structure contained systems that were no longer needed. We started by dismantling those,” says Suter. This allowed the team to make room for the new VX25 enclosures. “The VX25 offers a fair few advantages over its predecessor,” remarks Suter. “The range is more versatile – there are more functions with fewer parts. Everything had to be screw-fastened with the TS 8 but, with the VX25, doors and side panels simply slot into place. That meant we could easily remove the doors on-site and give ourselves optimum access and space to sort through and connect the cables.”

The video of the reference project: www.youtube.com/watch?v=ytsm3rRMy5c

Step by step, the team used this approach to redistribute the power supply. The only time drivers were aware of the switchover was when the normal power grid was being moved over to the new enclosures, as the lighting was briefly only covered by back-up power. In the Gotthard Road Tunnel, the back-up grid supplies power to every tenth light in the continuous strip lighting, meaning that it was temporarily slightly darker along a three-kilometre (1.9 miles) stretch than drivers would have been used to.

plus more efficient engineering due to improved, symmetrical frame section

thanks to ingenious hinge design and improved closure technology

More efficient use of space

due to outstanding compatibility between enclosure and base/plinth

Bayed enclosures are usually the first choice, even when being installed individually – but they’re not always the best option. When looking for the next size up in compact enclosures, many will again turn to bayed enclosures. Until now, there has often been little understanding of the benefits the VX SE free-standing system enclosure offers – faster ordering and assembly, simpler installation, better security and now compatibility with the VX25.