Aircraft manufacturing. Before a brand-new A320 can be put to work ferrying holiday­makers to sunnier climes, the aircraft has to pass some serious testing at Airbus. However, it isn’t just the aircraft that needs overheating protection to make sure it runs like a dream – the testing hardware needs proper protection, too. Airbus uses Blue e+ cooling units from Rittal to keep its testing facilities in tip-top condition.

Rittal is taking another step forward in digitalization with the Smart Service Portal. Service delivery can be accelerated and improved by digitalizing the industrial maintenance processes for Rittal cooling units and chillers from the Blue e+ generation. The new service portfolio benefits customers by taking some of the strain off their own maintenance teams when it comes to monitoring activities that do not add value.

The core elements of digitalization are networking, virtualisation and useful data handling. The Smart Service solution calls for devices to be networked via the internet using an IoT interface. This ensures operating data can be recorded continuously and mapped via the Smart Service Portal. A central, cloud-based data storage system makes big-data analyses possible. This data evaluation can then be used as a sound basis for deriving relevant recommendations.

The two Airbus workers sit on simple stools in the cockpit of the new Airbus A320, as the pilot seats have yet to be installed. Through the cockpit windows they see not clouds, but four monitors displaying the “ground test instructions” they need to work through. “We simulate all the flight movements here at the final assembly line,” explains Volker Jacobs, Head of Ground Testing on the fourth final assembly line of the A320.

However, the first tests start much earlier. As soon as the fuselage sections of a new aircraft have been assembled, the cables are laid there – and tested. All along the various assembly stations, all newly installed components and systems are immediately tested to ensure they are fully functional. Depending on the configuration of the aircraft in question, the full set of tests for an A320 can take around 400 hours to complete. The majority of these are carried out in Jacobs’ department. Fuelling, taxiing, take-off and landing together with various flight manoeuvres are all simulated on the final assembly line. “Our engineers could fly the aircraft, even though they’re not pilots,” the Head of Ground Testing points out. All functions that are essential to flight safety on the Airbus must be 100 per cent reliable. Only when an A320 has passed all these tests with flying colours can it be sent for delivery and take off from the runway at the Airbus plant in Finkenwerder on its maiden flight.

The tasks carried out on the final assembly line include the complete fit-out of the cabin. “Once again, we check everything – from the headphone sockets and in-flight entertainment screens on each individual passenger seat right through to the coffee machine in the galley,” says Jacobs. Testing all the onboard functions requires high-performance hardware that is connected up to the sensors and actuators of the aircraft and used to run complex simulation programs. A total of three computers are needed for the simulations. Each computer is equipped with additional hardware that links up to the components in the aircraft. Lengths of cable as thick as a human arm reach from enclosures containing the simulation computers to the insides of the aircraft. This makes it possible to simulate parameters such as engine speed and the signals from the speed measurement devices. The computers also capture output signals, primarily voltages and volume resistance. 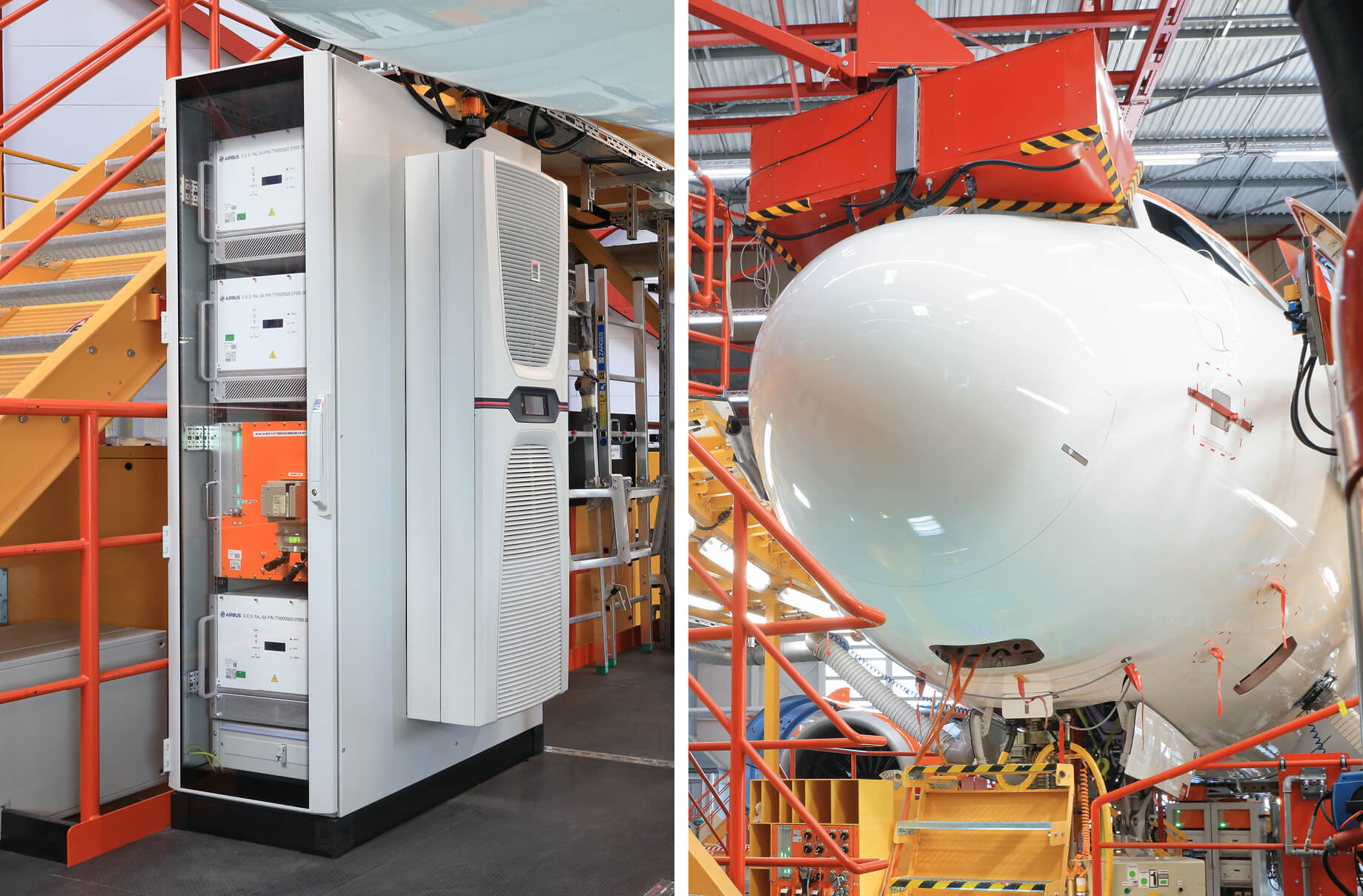 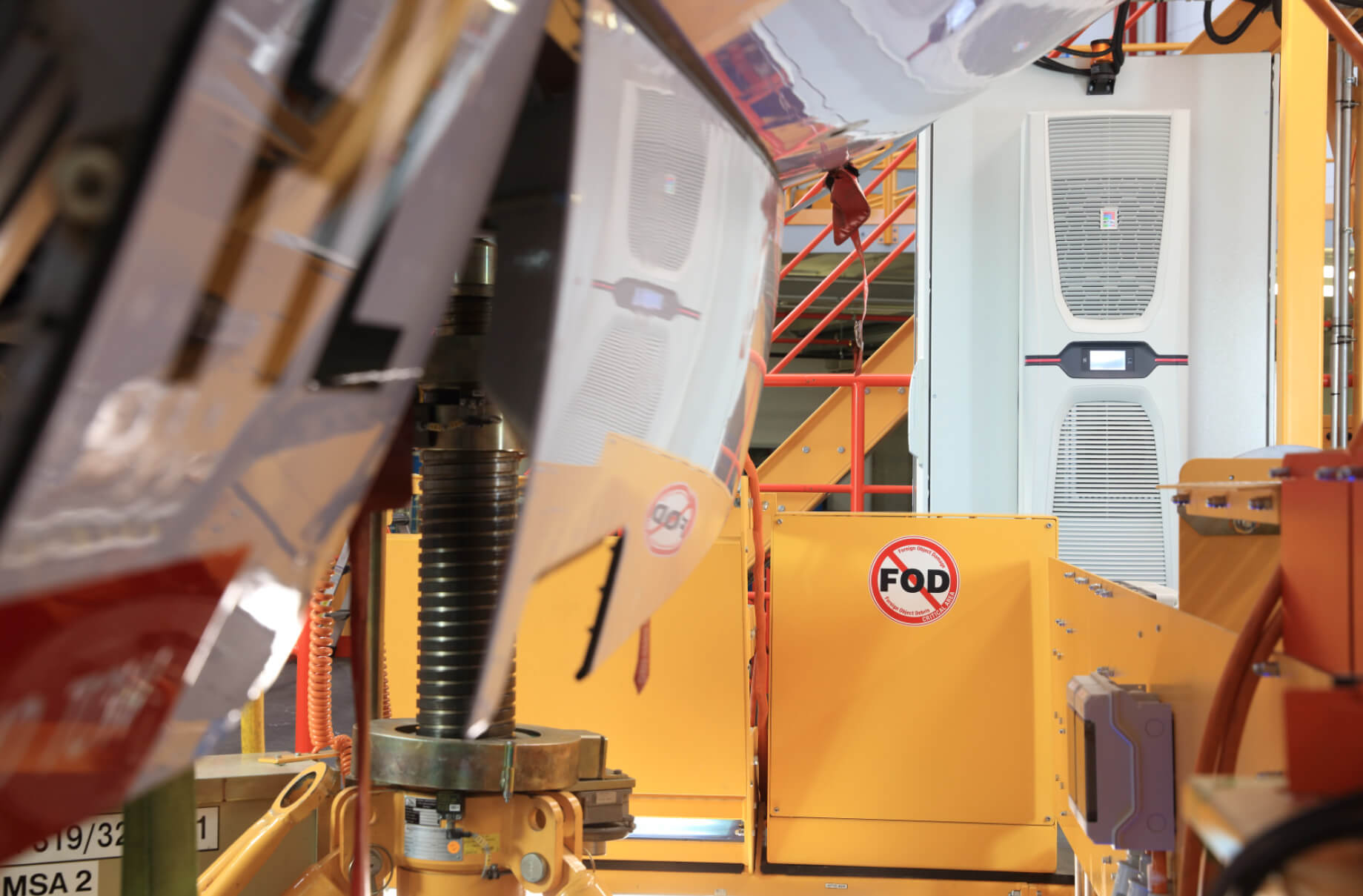 “The Blue e+ cooling units run all day. The quality is right and the customer service we get from Rittal is excellent.”

Airbus developed the simulation computers, which are installed in a Rittal enclosure on the test bench, in-house. The hardware generates a lot of heat when in use and therefore needs to be cooled – the voltage transformers in particular, which are needed for the connection to the components in the aircraft, can get very hot. “In the past, before we started using active cooling systems for the computers, they often crashed during the summer,” Jacobs recalls. Given how tightly and carefully coordinated the production schedule is at Airbus, that simply could not be allowed to continue. The enclosures were fitted out with active climate control systems in 2006 to avoid precisely such downtime. Today, there are 28 of these test stations in the Airbus plant, all similarly configured. What’s more, all are fitted with Blue e+ cooling units from Rittal to protect the sensitive hardware from overheating. The reliability of the Blue e+ units is particularly important to Airbus. “If the cooling systems for the simulation computers were to fail, we wouldn’t be able to conduct our tests,” Jacobs points out. The test bench is in use at least five days a week in double-shift operation. “We switch on the cooling units in the morning and they run with absolute reliability,” he says. The cooling systems at the test benches are monitored and, should a unit still somehow fail, a warning light comes on to alert staff.

The idea to upgrade to the energy-efficient Blue e+ cooling units came about while working on energy management for the ISO-14001 certification. Rittal Support gave Airbus crucial assistance during this process, as Jacobs explains: “Thanks to the energy efficiency calculator, we were able to work out in advance how much energy we would save by upgrading to the new cooling technology.”

Well-timed maintenance is crucial to ensuring the cooling units run reliably and efficiently. The main causes of failures are critical component statuses and external influencing factors. Networking the units with the IoT interface ensures the condition of all cooling units is reported to overarching systems. Maintenance teams can then promptly plan the necessary measures and carry out the work at the most appropriate time. These benefits can be taken to the next level in the future by linking up to Rittal’s Smart Service Portal. The networking between the devices and continuous status monitoring ensure critical operating statuses can be identified early on.

The senior managers at Airbus were also impressed by how user-friendly the cooling units are. All parameters can be adjusted easily, using the two buttons on the control panel, and the display depicts status and error messages in clear language. “The quality is right and the customer service we get from Rittal is excellent,” Jacobs concludes. Based on this positive experience, the test benches at the Airbus sites in the USA and China, which are configured in exactly the same way, are also being retrofitted with the new Blue e+ cooling units.