Sustainability. Climate change is undoubtedly sweeping across the political agenda. Enough said? Not necessarily: “The need to protect the environment is not up for debate – but the question of how to do it is.” Finally, Nicola Salandini speaks truth to what has become a heated global debate.

As the Plant Director at Rittal in Italy, Nicola Salandini sums up the situation in an impressively simple way. Common sense is called for – the circumstances are too disparate, and the media debate too highly charged. With Fridays for Future embracing radicalism, tactical decision-makers adopting more of a visionary position, and technocrats hiding behind guidelines and directives, only one thing seems clear at the moment – someone ought to keep a cool head.

And that is exactly what Salandini and his 430 colleagues at the northern Italian site in Via degli Imprenditori in Valeggio sul Mincio are doing. The workforce at the Rittal plant south of Lake Garda has its own response to the global climate issue – industry-tested solutions that are cutting energy consumption and CO2 emissions by 75 per cent here and now. Blue e+, the latest generation of cooling units, has been manufactured in Valeggio sul Mincio since 2015: “With the Blue e+ series, Rittal has succeeded in creating a classic win-win situation,” explains Marco Villa, Managing Director of Rittal Italy: “Users benefit both economically and environmentally – in turn, Rittal can excel as a front runner in green cooling technology.”

The essential features of the Blue e+ chillers in a video.

In the case of Rittal Blue e+ chillers (1 – 6 kW recooling systems) that are also manufactured in Vallegio sul Mincio, it is DC inverter technology that is the real game changer when it comes to the much talked about “irreconcilable differences” in the climate debate. As speeds are infinitely adjustable and an electronic expansion valve automatically regulates the cooling power to match the load profile of the application, only as much power is generated as is needed. On top of that, the microchannel heat exchanger uses 55 per cent less refrigerant – a further welcome boost.

For decades, Rittal has been committed to measures that have a rapid impact rather than mere declarations of intent. Maco villa adds: “We should remember that Rittal was one of the first to switch to CFC-free refrigerants as early as 1992 with the ProOzone initiative. And even 20-year-old Rittal units comply with the new regulation on fluorinated greenhouse gases that will come into force throughout the EU in 2020. Environmentally friendly products thus make economic sense, too.” To ensure everyone in the domestic Italian market also gets the message, the 54-year-old manager has a simple goal: “I want every technical office to have a Rittal catalogue on their desks.” Villa is confident that, one way or another, Rittal has a fantastic standing in Italy: “Rittal has a reputation that money can’t buy – we’re synonymous with quality and expertise.”

One hundred per cent sales growth since 2003, a 35 per cent market share for large enclosures, and around 6,000 registered customers in 2017 and 2018 alone speaks for itself. Making what’s good even better is the new delivery promise from the first quarter of 2020 onwards: “Whether it’s two or 50 products, we guarantee next-day delivery for orders placed by 2 p.m.” – up to 100 kilometres south of Rome.

green cooling technology products left the plant in 2018. Since 2011, production has tripled. Each day, 900 units are assembled.

staff work at the Rittal plant in Valeggio sul Mincio, including 265 in production.

standard designs and 2,000 variants make up the product portfolio – besides the new Blue e+ generation of
cooling units, these also include recooling units, chillers, heat exchangers and thermoelectric coolers.

Villa sees the real boom regions in Italy as being north of the capital, such as Lombardy, Emilia Romagna, Venice and Tuscany. Panel builders and switchgear manufacturers in these regions want perfect enclosures and efficient cooling solutions for industrial use in mechanical and plant engineering, the oil and gas sectors and food and beverage applications. Industry 4.0 and the future are not just buzzwords at the Rittal plant in Valeggio, they are actually being put into practice in very specific ways. “Take Blue e+ chillers,” Salandini explains: “The most important element – the option of IT-based networking with other machines – is already in place thanks to their intelligent interfaces. The integrated monitoring sensor technology that is essential for predictive maintenance is also built in.”

Since 2011, every corner of the Valeggio sul Mincio plant has been a showcase for the step-by-step implementation of Industry 4.0 in the company’s own production operations. The now standard pick-to-light system in the warehouse, the automated guided vehicles in production, the fully automatic quality testing at one of the six test stations and the semi-automatic packaging of cooling units are just a few examples. Initially it was about the human factor. “We shifted mindsets towards lean processes,” Salandini explains: “It has been a marathon, but now we’ve already achieved maximum transparency and are making full use of standardised workflows.” Salandini should know. He’s probably more familiar with the plant than he is with the back of his hand. With the company since 1993, the 47-year-old MBA graduate started in production before moving to design and then assuming responsibility for the Technical Department. In 2011, he became an Operational Manager and was finally appointed Plant Director in 2014.

The integration into the international Rittal network continues to fascinate him: “Virtually every step in assembly is determined in close consultation with the Manufacturing Engineering department at the Rittal headquarters in Herborn.” This is also where the decision was made to launch a modular production system so that new assembly lines could be quickly set up for new series. “The semi-autonomous group work has also proved a definite success,” Salandini says: “Specific teams monitor the cooling units from the start of assembly through to completion.” As a result, the act of handing over semi-finished units to other employees – as well as responsibility – has become a thing of the past. 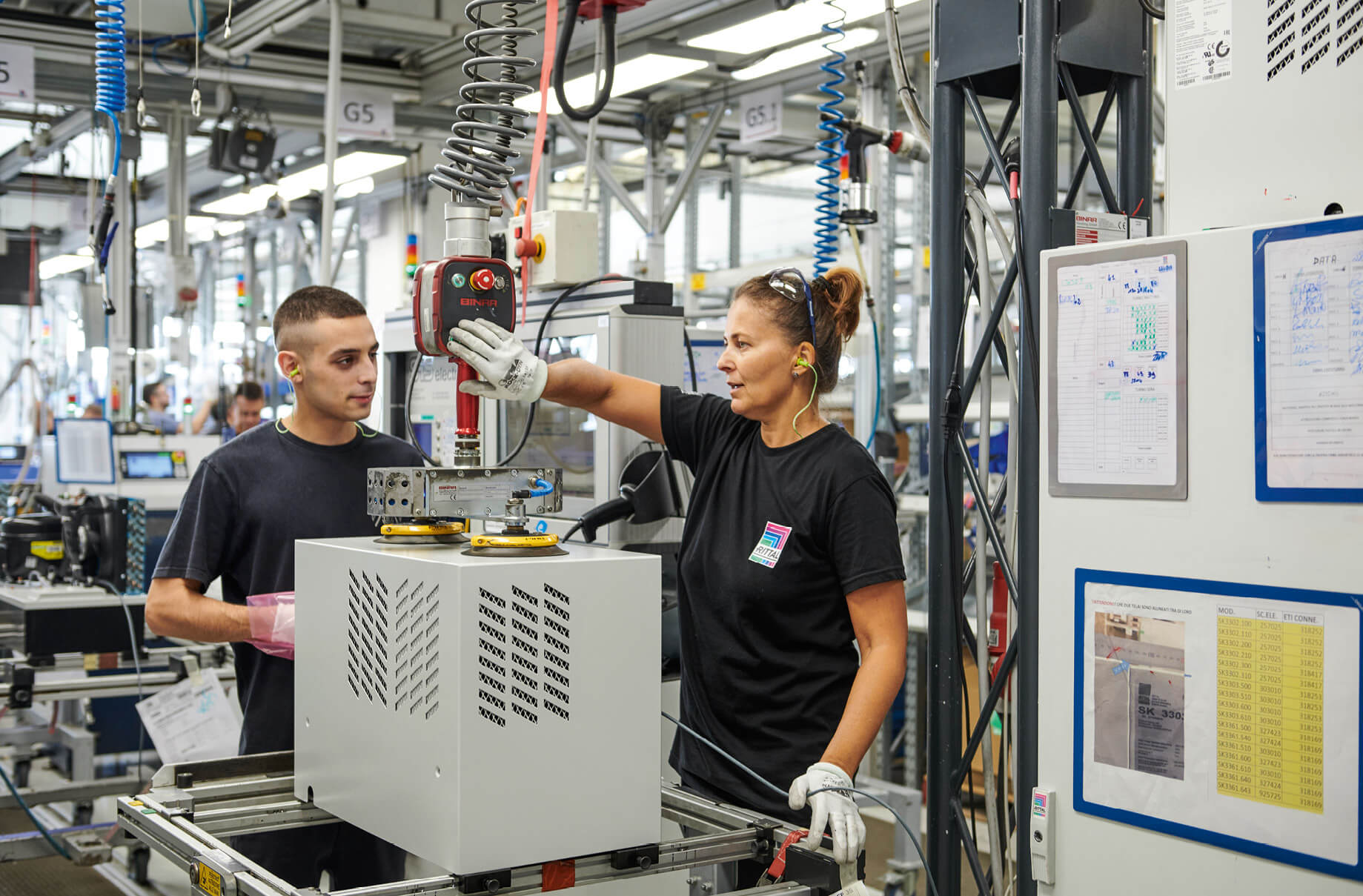 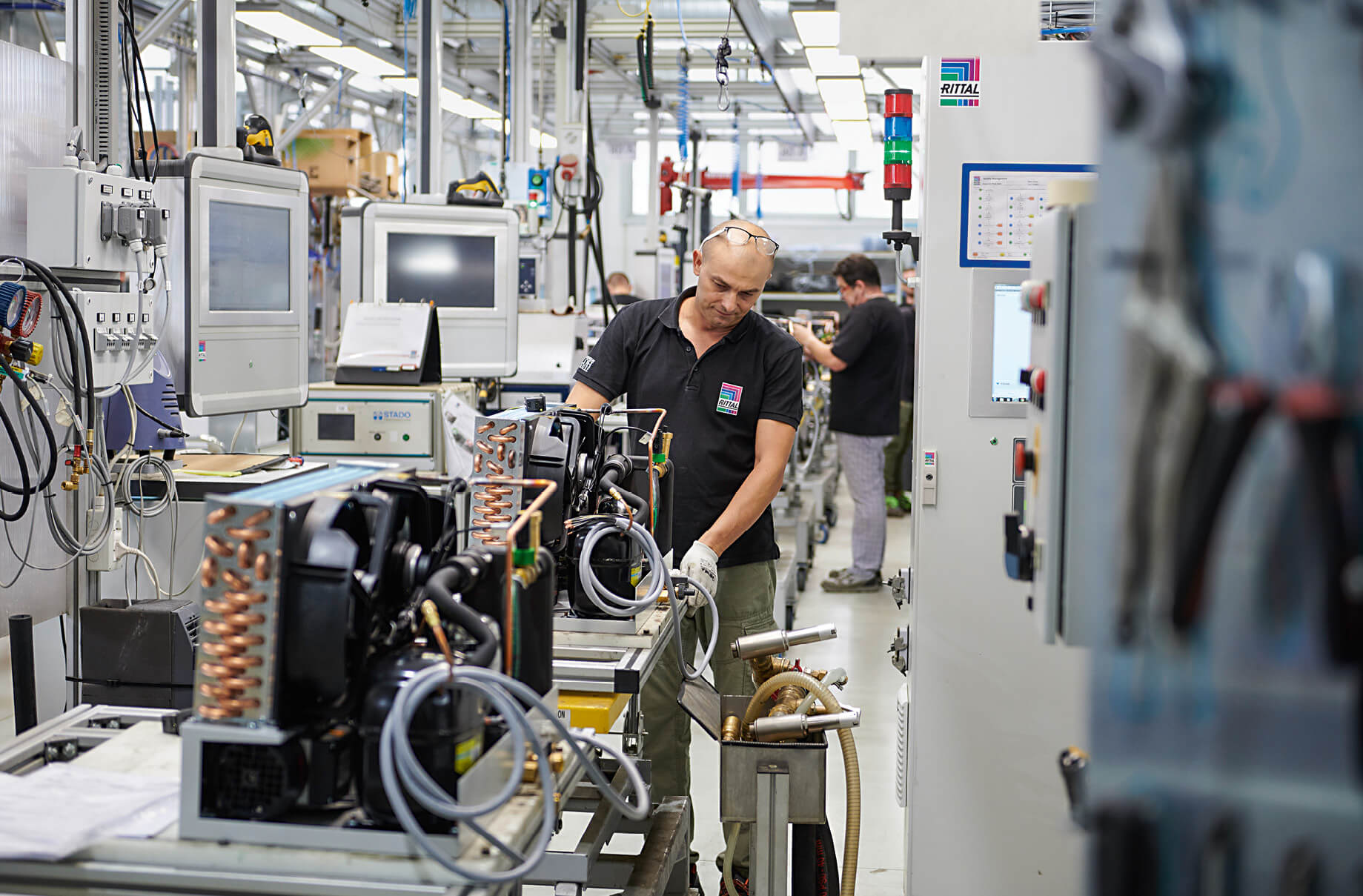 Production capacity has actually tripled in the last eight years. Salandini is truly proud of the systematic digitalization in production. “We’re building a physical and a digital production line in parallel for the assembly of Blue e+ units.” On a practical level, large touchscreen displays guide staff through assembly work. Eplan Smart Wiring, for example, is used here – a software solution from Rittal sister company Eplan. This visualises the wiring, including all wiring routes and assembly steps. As soon as a connection has been wired correctly, it turns green as part of a traffic-light system. The digital display in EPLAN Smart Wiring references the 3D layout of the virtual model in EPLAN Pro Panel (engineering software for 3D designs for control enclosures, switchgear and power distribution systems), which continuously enables target-actual comparisons. The end result is that something Industry -4.0 pioneers have always envisioned is finally coming to fruition. Whereas humans previously served machines, the relationship has reversed – machines are serving humans.

End-to-end data integration for collaboration between people, physical components and IT – parallel processing scenarios – highly automated processes – the availability of digital twins at every stage of production: Looking at the basic ingredients of every Industry 4.0 recipe, the close collaboration between Rittal and Eplan at the Valeggio sul Mincio plant makes perfect sense. The same is true of the decision to share the new Italian headquarters in Pioltello near Milan. Covering an area of 4,800 square metres, since May 2019 the site has offered the more than 100 employees space for offices, a showroom, technical training and interactive demonstrations of Rittal configurations and Eplan planning software.

It’s good to know that the building was designed according to nearly zero- energy building criteria. A 23.4 kilo watts peak photovoltaic system, an automated irradiation control system inside and an external sun protection solution ensure low energy consumption and outstanding sustainability. Marco Villa: “Environmental awareness always begins at home.” And when he comes up against people who are determined the world is doomed, he has no qualms about making a stand: “I’ve got three children, so I’ve got no choice but to be optimistic.”