Adaptive cruise control and lane assist are two functions devised by automotive developers some 20 years ago that have long since become standard features in all new cars. However, countless further test drives will be required and huge volumes of data will need to be evaluated before automated driving truly becomes a reality. That’s the goal towards which the BMW Group is working, collecting data during numerous test drives and processing it in a Rittal IT container.

It’s a cold, sunny morning in February. On an industrial estate north of Munich, the barrier at the exit of the BMW Group’s plant goes up and down by the minute. Vehicles that are not yet available to buy, some with striking prototype paintwork, leave the German car manufacturer’s site one by one. Each driver’s mission is to thoroughly test the car’s wide-ranging functions and their interaction. The future of automated driving is anything but trivial for the manufacturer.

Does the car detect a cyclist and brake as a precautionary measure? Does it correctly identify road signs and speed limits? And is there a warning signal if drivers remove their hands from the steering wheel or if their eyes close due to fatigue? If not, the technology needs to be optimised and subjected to further tests. All the results are recorded during the drive. This produces masses of data that first needs to be stored safely and then evaluated. But where can this valuable data be kept? 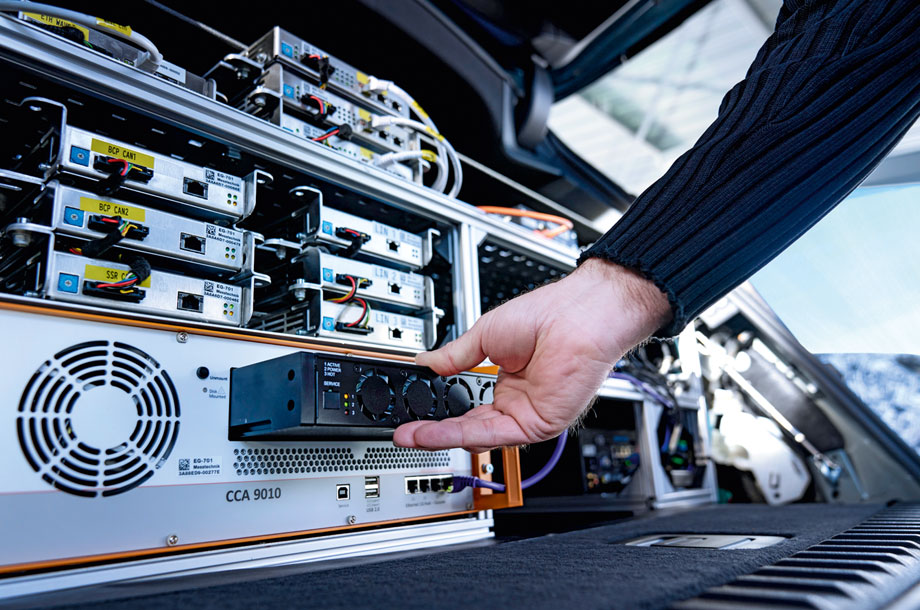 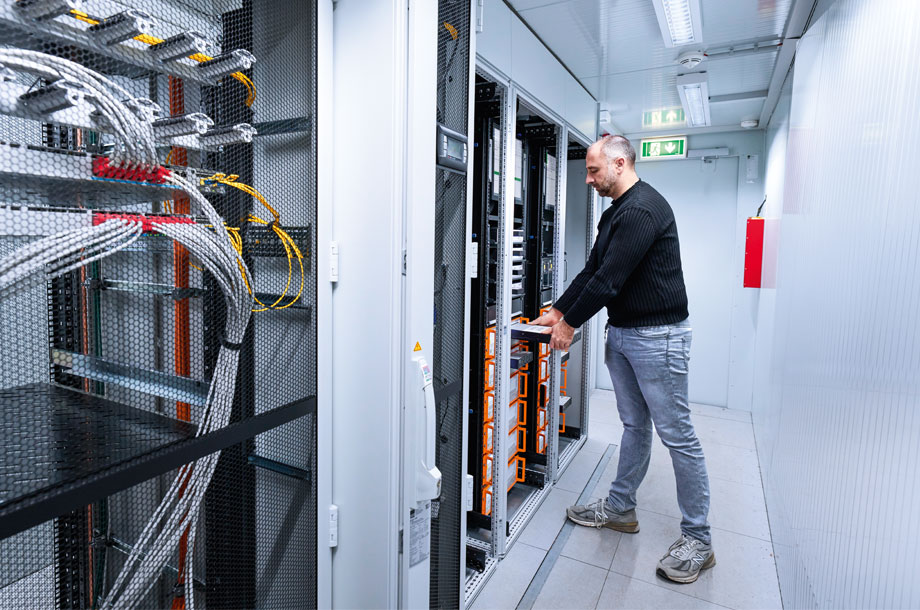 When test drivers are collecting data, they always step into the shoes of the person who will ultimately be behind the wheel. They run through various standard driving scenarios such as the driver approaching the vehicle, getting in, starting the engine and making phone calls. The focal points of the test runs are defined at the beginning of each week and the routes are adapted accordingly. If, for example, the focus is on telephony functions, the cars are routed through areas with relatively poor network coverage.

of data per second is produced during test drives. By the end, the 16 TB hard drive is full.

BMW Group test drivers always start off by opening the boot and inserting a solid-state drive the size of three VHS video tapes. Their aim for the day is collecting data, data and more data. There’s no space for lots of shopping in the boot of the car, because it contains numerous measuring devices and sensors logging everything that happens during the drive. With every second that passes, 1 GB of data is generated. The hard drive, which has a capacity of 16 TB, is 75 to 100 per cent full by the end of the shift.

The day ends just as it started, with drivers opening the car boot, removing the hard drive and inserting it into a copy rack. Following an initial automatic preselection, almost 25 per cent of the data collected is transferred directly from the rack to the main data centre in Munich via two 100 GB lines. During post-processing, the measurement results are evaluated and the functions optimised.

When looking for a secure “garage” for three copy racks, the BMW Group opted for a turnkey IT infrastructure solution that meets all physical safety, climate control and power supply/backup requirements. Given that there wasn’t enough space for a secure server room in the buildings at the test site, the experts decided on an outdoor IT container solution that could be set up quickly and also has very practical benefits. Almost as if making a pit stop, the drivers of the test vehicles can drive right up to the data centre to insert the data storage devices for the readout process.

The technical solution consists of a turnkey Data Centre Container from Rittal that is equipped with racks, cooling and an uninterruptible power supply that simply has to be plugged into the mains. One striking feature inside is that an aisle containment solution divides the data centre into two sections. For security reasons, drivers can only access the front part of the racks, where the data carriers can be inserted easily and conveniently and where the input functions for data transfer are located. The rear part of the racks is enclosed and locked, which means only authorised personnel have access. It also protects the area containing sensitive technology if it happens to be raining or snowing. Once the test drivers have deposited the day’s data in the Data Centre Container, their work for the day is done.