Smart city. Urban planners and researchers in Songdo, South Korea, have created a smart city with the ability to think and make residents’ lives safer and more convenient. The data it produces is gathered
in a high-performance data centre from Rittal.

It’s 7 a.m. and all is well in Songdo, South Korea. The sun has long since risen and the smell of freshly brewed coffee is wafting through a modern apartment. The blinds rise automatically, revealing the city’s 40-hectare central park in the distance. The apartment was a lucky find for Timothy from Wisconsin (39), who only recently moved to this newly developed district of the sprawling city of Incheon. Timothy works in a nursery, looking after the children of the new local residents employed at one of the large corporations just a few blocks down the road.

Songdo is certainly drawing in the crowds. Over the past few years, people from overseas and the overflowing capital Seoul have flocked to the new district and moved into its fully networked apartments. Designed as a smart city from the very beginning, the district brings together living and working spaces side by side. At first, the roads, parks, residential complexes and commercial centres existed only on the drawing board. Before construction could begin, South Korea had to bring in around half a billion metric tons of sand to reclaim land from the tidal flats in the Yellow Sea. Today, countless skyscrapers reach up to the heavens between the city of Incheon and its international airport of the same name. The smart city continues to grow.

In his apartment, Timothy saunters into the bathroom. As his favourite music plays quietly in the background, he brushes his teeth and taps a smart wall panel to check today’s temperature and news and see what the traffic is like. The panel can even offer him a second view of the extensive park around which the city is built – webcams provide live streaming.

Timothy and his neighbours enjoy the many conveniences the smart city of Songdo has to offer. Data is harvested and evaluated everywhere to make residents’ lives as easy as possible. Cameras positioned near traffic lights, for example, relay video streams to the transport control centre. Meanwhile, built-in road sensors provide measurement data on the current traffic density, and special weather sensors register temperature, wind speeds and air purity. Further information is obtained from police officers, fire crews, and private companies such as telecommunications providers.

The urban planners’ idea was to come up with a smart city that would require just two thirds of the energy and resources consumed by similar conventional cities by evaluating residents’ activities and habits. South Korea isn’t the only place where such forward thinking is urgently needed. The United Nations predicts that by 2050 around 70 per cent of the world’s population will be living in cities – that equates to around three billion people. Experts estimate that metropolitan areas account for one third of our overall energy consumption.

In intelligent cities like Songdo, state-of-the-art technology is set to help tackle climate change. Networked information and communications technologies (ICT), cloud systems and the Internet of Things (IoT), managed via a common platform, are destined to help mega cities evolve into smart cities in the future. Engineers and IT specialists predict that smart cities are much more cost-effective to run, consume much fewer resources, and improve residents’ quality of life.

“Residents should feel that they live in the safest and most modern city in the world.”

Songdo’s project developers, who come from both the United States and South Korea, were eager to see their planned city, located in the Incheon Free Economic Zone (IFEZ) between Japan and China, set a new benchmark for urban development. They were certainly successful, as Songdo is now considered to be the blueprint for a new urban future. “Songdo is a globally competitive smart city,” says Jongwon Kim, local government official for the IFEZ’s smart city. “All services are based on state-of-the-art information technology, providing residents with a secure and extremely comfortable environment,” he says. The IFEZ authorities have patented the smart city model and its underlying technical platform and already sold the rights to buyers from various far-flung countries including Ecuador, Colombia, Vietnam and India. The world over, intelligent, networked and sustainable cities are in the pipeline.

Back in Songdo, the smart city’s residents profit from innovative technical developments. Anyone living in an apartment in one of its energy-efficient residential complexes doesn’t need a key to open their front door – placing their finger or a key card onto the fingerprint scanner incorporated into the door handle does the trick. The lighting and blinds are centrally controlled in all rooms via a smart wall panel or smartphone app. If any problems occur, residents can video call the caretaker via their TV, which helps save time – a rare commodity in hectic South Korea. They can even chat with neighbours from the comfort of their own sofa using a video conference system. 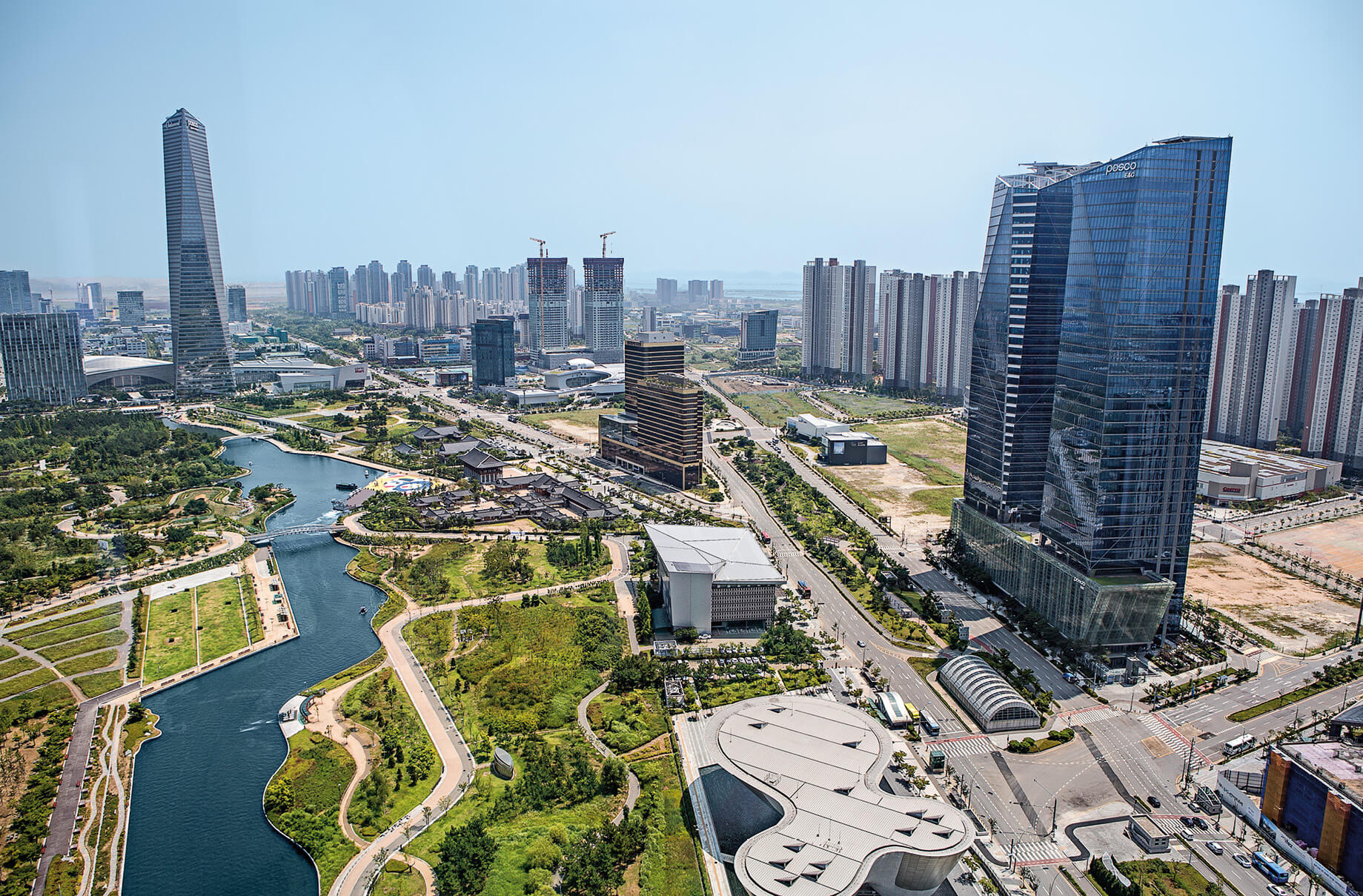 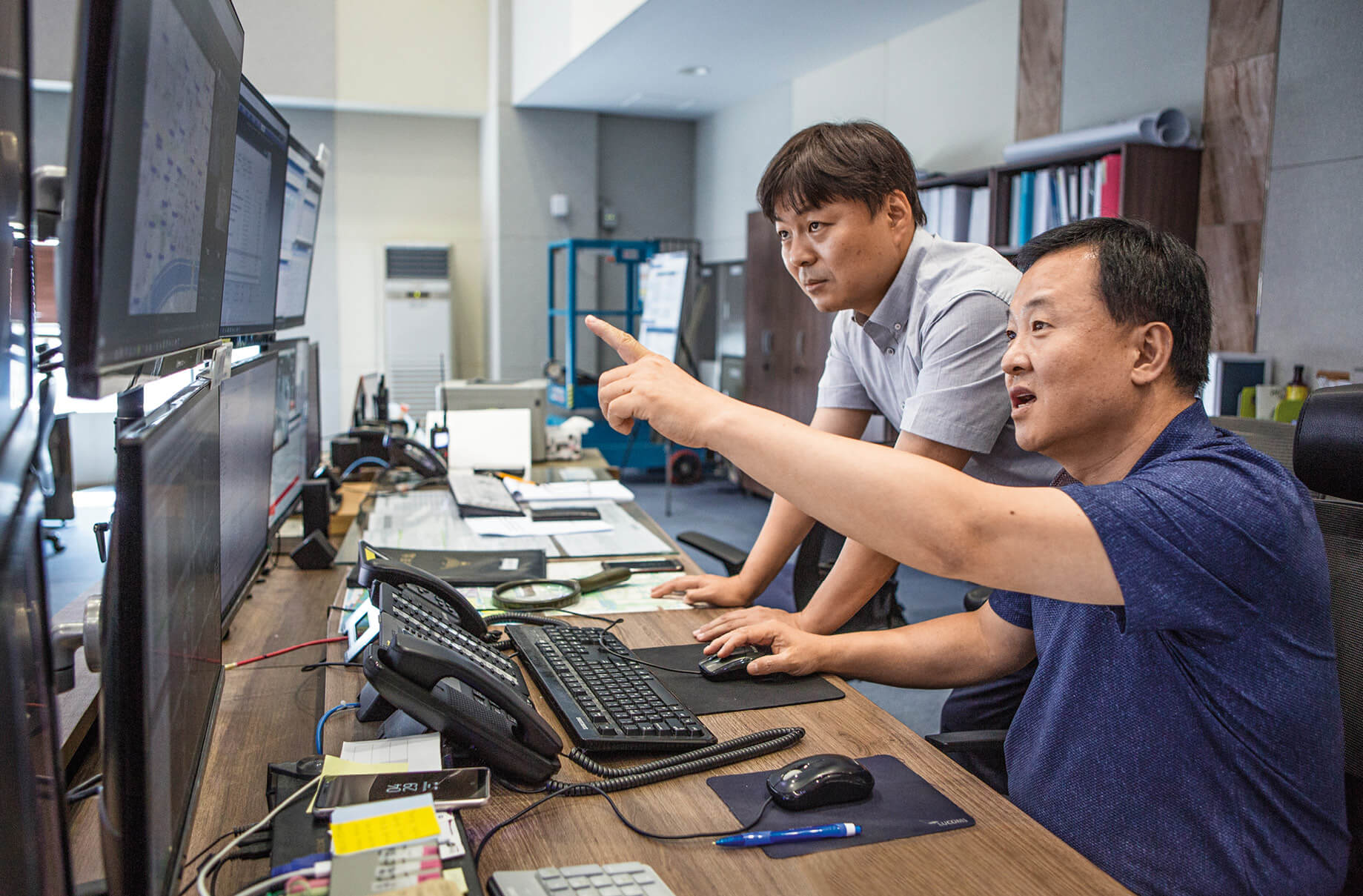 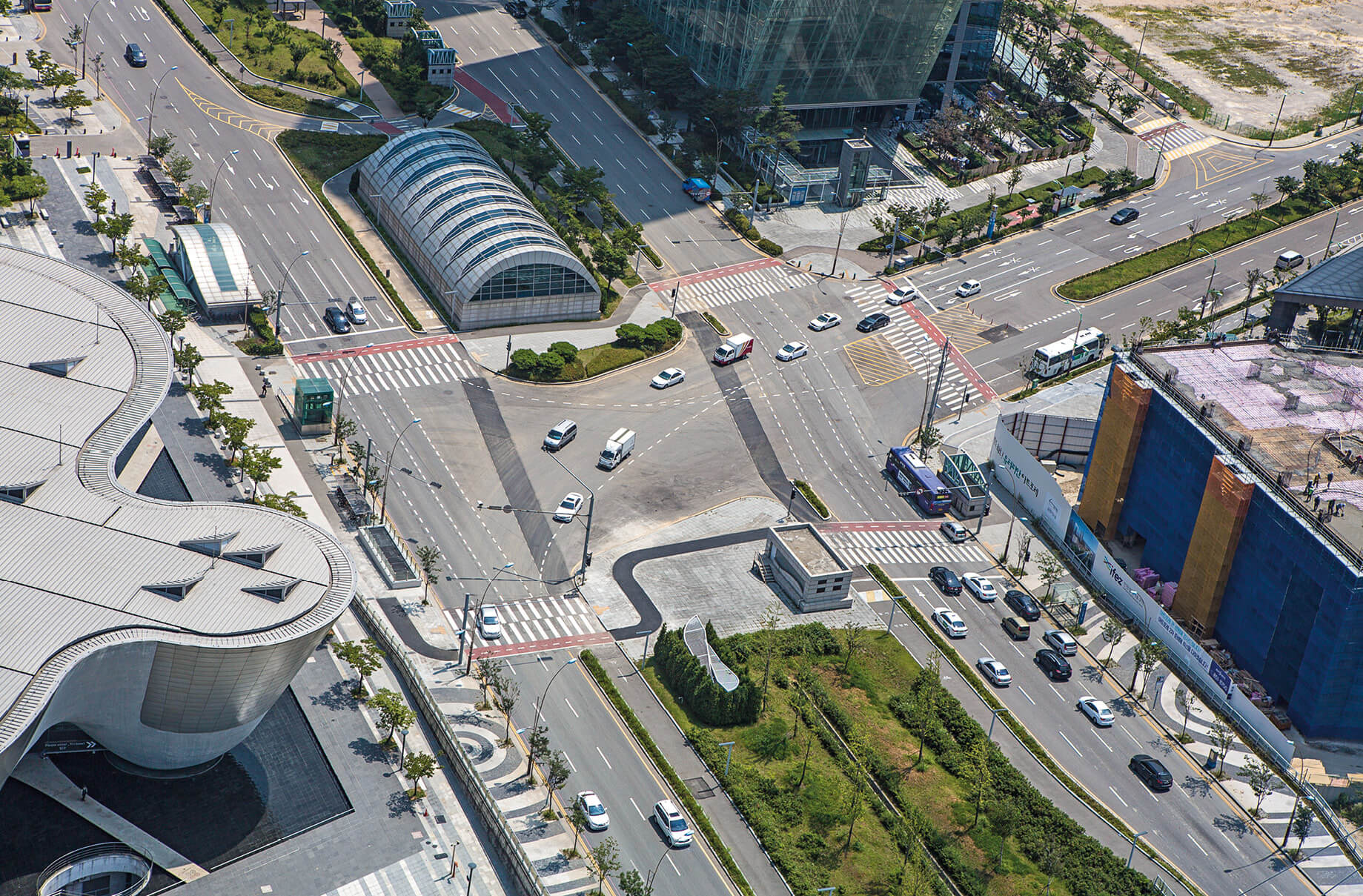 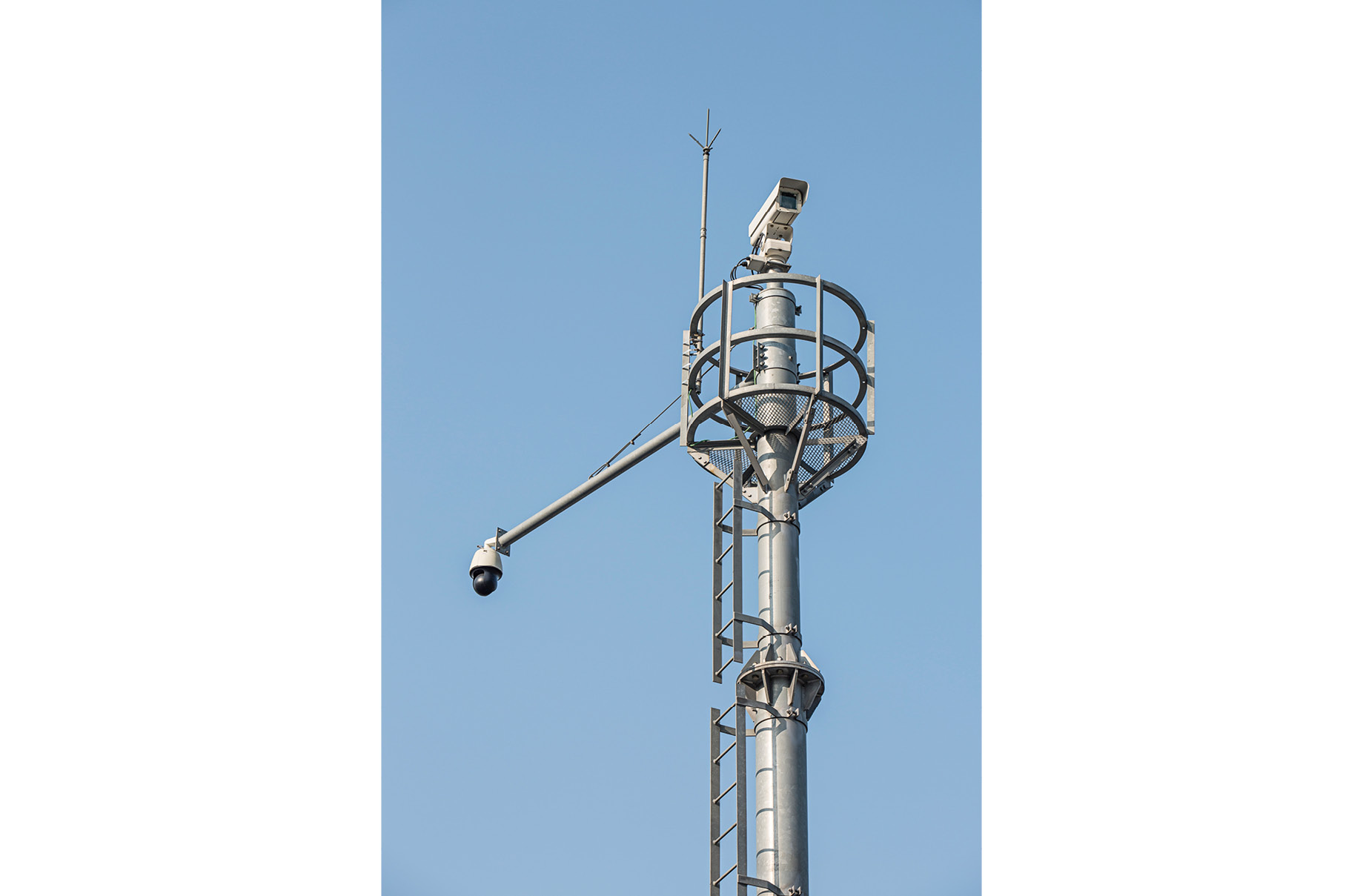 But convenient technical innovations aren’t just found within residents’ homes. Street lighting, for instance, only turns on when someone is actually strolling down the street, while intelligent traffic signals analyse traffic densities to coordinate a ‘green wave’. Sensors determine how much electricity is being used and where, or how much lighting and heating is required based on the number of people present in a certain location at that moment. They register how many vehicles are on the roads, measuring air pollution levels as an additional precaution. If a fire breaks out, sensors raise the alarm before anyone even notices something is up, initiating an immediate response from the fire brigade or other emergency services. Displays on underground railway platforms and at bus stops show arrival and departure times for the city’s many transport systems – all updated in real time.

It is as if the city has eyes and ears everywhere – something that takes some getting used to. “Initially, people misconstrued smart cities as being synonymous with total video camera surveillance,” says Sangho Lee, Director of the IFEZ Smart City ­Integrated Operation Center. The main focus, however, is on evaluating measurement data. A specially developed technical platform processes the never-ending stream of data in real time, which forms the basis for information and services.

First and foremost, this calls for a stable infrastructure with powerful servers, networks and computers. After all, the system must be able to react extremely quickly to any new circumstances or deviations. This is in part why IT expert Sangho Lee opted to use a dedicated, fail-safe cloud data centre on the third floor of Songdo’s distinctive G-Tower, which is where the “U-City Management Center” is headquartered. The “U” here stands for “ubiquitous”, another epithet used to describe smart cities. This is where the data from all transport, environmental, crime prevention, fire protection and building management sensors is brought together.

“I was looking for a suitable solution and was very impressed by the data centre’s design modelled on cloud computing,” Lee recalls. “Rittal already provided solutions for all the data centre system’s components, which could be configured in next to no time thanks to the standardised IT infrastructure.” In addition to the TS IT racks from Rittal, the data centre also comprises the necessary modules for climate control, power distribution, uninterruptible power supply, fire protection, monitoring and access control. “The data centre meets the smart city’s needs down to a tee because it provides everything needed to process and analyse the data spread across the city and gathered in decentralised edge data centres in the future.”

Besides supplying the hardware, Rittal Korea assisted the IFEZ Smart City Integrated Operation Center with devising its data centre concept. “With the aid of 3D designs, we showed the customer what would be ideal for their specific needs,” says ­Brian Moon, who manages Rittal IT sales alongside his fellow colleague Eric Yang. There were certainly various construction challenges to overcome. “The building isn’t really a suitable location to install a conventional data centre due to its low ceilings and raised floors, which meant that the rooms required special insulation and cooling.” What’s more, the customer was keen on having a scalable infrastructure so it could grow alongside the city.

“The solution we proposed was a system comprising cold aisle containment and inline cooling with busways,” Moon explains. Deploying cold aisle containment for the ­IT racks on the third floor of the G-Tower enables energy-efficient cooling of the IT systems. The actual cooling is provided by Rittal Liquid Cooling Packages, with redundant air-water heat exchangers installed directly on the racks. The customer received everything from a single supplier – from the racks and cooling to power distribution. Once the cables were laid, the data centre took just under three months to fully install. “That makes it one of the fastest projects in the world,” says Lee with pride.

Work in Songdo continues and self-driving cars are soon expected to ensure greater road safety and reduce pollution levels. Purpose-built camera drones, meanwhile, collect traffic and environment data, which is then analysed using artificial intelligence to develop yet more innovative services for local residents. Lee sums up the objective behind the IFEZ’s smart city: “Residents should feel that they live in the safest and most modern city in the world.” He intends to rely on the expertise of his tried-and-trusted partner for future projects, too. “The underlying technology behind new services in our smart city will also come from strategic partners such as Rittal who provide turn-key solutions,” he says.

Timothy might soon be able to use his smart panel to do much more than control the lighting and blinds in his apartment. In the near future, there’s a good chance he can summon his autonomous vehicle, which will drive up outside his front door as soon as he locks it – simply by way of his fingerprint.